Multimedia makes is so easy to create more rigorous math problems.  The example below shows how you can use and edit computer screenshots to add rigor to a typical math problem.

The screenshot of the interactive spinner was taken from Glencoe's Virtual Manipulative website.  The problems are correlated to the 6th Grade Common Core State Standards. 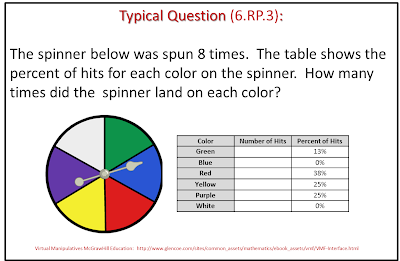 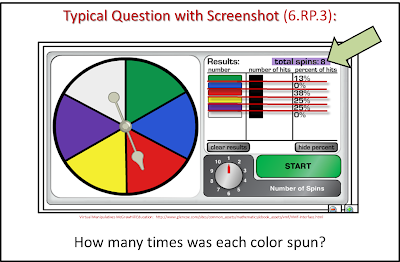 In this example, the problem comes to life because this a screenshot of an interactive manipulative.  The spinner has been spun 8 times with the percent of each color shown in the right column of the table.  The number of times each color was spun has been blacked out and the question is still the same.  The rigor of this problem has NOT be altered because the given information and the question remain the same. 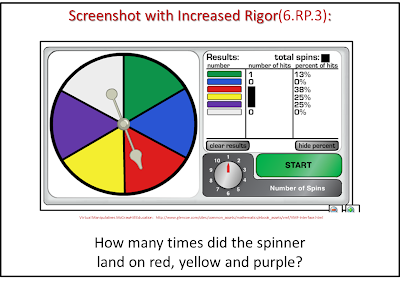 The screenshot above is the same as the 2nd example, but this time the total spins and the number of hits for red, yellow, and purple were blacked out.  The question is still basically the same.  You're still asking how many times the spinner landed on certain colors.  However, the rigor has been increased because the total # of spins has been blacked out.

By making this simple change, the problem goes from being a routine procedural question to one which involves problem solving.  Students now have to think about a plan for solving the problem based on the information given.  This problem also involves multiple steps with 2 different types of percent scenarios since students have to first determine how many times the spinner was spun before calculating the number of times each color was spun.

Caution:  When making this type of change to a problem, it's only non-procedural the first few times.  If all practice problems are structured this way, they become procedural.  That's not always a bad thing if the goal is to practice the procedure.  Just realize that the rigor dissipates after the initial problem solving opportunity.

Ex. 2 Typical Question Altered to Increase Rigor by Changing the Constraints and the Question (Non-procedural Problem): 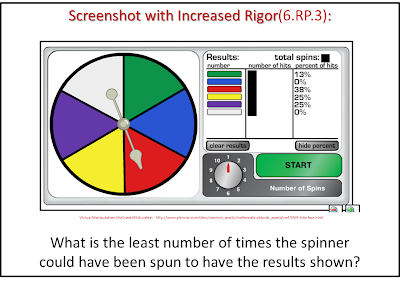 This time the same screenshot is used, but the total spins has been covered up and the question has been changed.  The rigor is now much higher and more problem solving is involved.  Students have to decide on a problem solving method(s) which would work for solving this problem. They'll also have to think about the percents given in order to determine what type of answer might make sense (a lot of spins or a small number of spins).

Notice that the type of practice has not changed, but the level of rigor has dramatically increased.  In addition, if the goal is for students to practice finding percent of a number, this type of problem can provide a lot of practice for this skill as students guess and check possible answers.  The practice of the skill within the context of the problem is still procedural, but finding a solution to the problem requires students to think and make decisions which makes the process of solving the problem non-procedural.

Note: When the level of rigor increased to this degree, the problem became much more interesting and compelling.  This is a problem students might actually want to solve. This problem might be interesting enough to give students the motivation to persevere through the problem solving process.

Get your FREE Copy 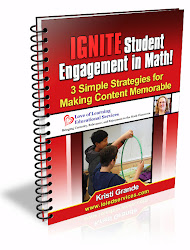 Subscribe to our newsletter and get your FREE copy. You'll also receive free tips and strategies for teaching math and technology integration.